Hunter Reviews And our feature with Hunt Wicked Close TV

When we talk about our trip to Boulder T, we always discuss how great it was to spend time with your terrific team preparing, …

sighting in, talking strategy, sharing stories, eating great food and ultimately reflecting on our success. We saw a lot of beautiful animals, we had great guides, we ate great food and enjoyed our downtime too, and my boys harvested an Aoudad and a Fallow. That all makes Boulder T a special place.

Thanks, Jim, Colten and Westin
Troy and his Boulder T Ranch was my first experience in exotic game hunting and I really didn't know what to expect. I arrived…

at the ranch for my Red Stag Cow hunt and was immediately put at ease and felt at home. Troy and his team make everyone feel welcome and at home. I will definitely be returning to this game ranch in the future and will be bringing my family to enjoy a weekend at the ranch. I really appreciate Boulder T Ranch and the experience that I had this past weekend and the quality of animals are exceptional. I look forward to next year's hunt (when the freezer starts getting emptier) and hope that I can work with Troy to promote his ranch as a premier family oriented game ranch.

Thank you Troy and family, Mike Jones
I would like to thank Troy and CD for the ram hunt that my son Tadd and his friend Kaleb experienced at Boulder T Ranch…

It was the boys' first hunt and a memory they will never forget. The accommodations and the food were awesome. We were all treated first class. This is an experience I would recommend to anybody who wanted to hunt or bring their kids on their first hunt. I cant wait to go hunting at the ranch again.

Darrin, Tadd, Fernando, Kaleb – Happy Hunting
I want to thank you for a very special weekend. Your ranch is very special to me and I know that if others knew about…

what you have, you could retire on the hunts you would sell. The gentlemen you had there this weekend were great people and added another value to your ranch and the hunt. I am not sure the last time I ate so much, (Kevin is a great Cook). A special thank you goes to CD, he has done a great job for the past two years getting me on the animals that I wanted to harvest.

What I will not be able to put into words is the excitement that my daughter gets in coming to your ranch. Even though she did not get anything this year that did not matter to her. She loves seeing all the animals and I just enjoy getting to spend quality time with her. Your ranch will always be a special place to me and I thank you for allowing me to experience this with her.

Thank you again for all you did this past weekend and I look forward to next year.Hunter Testimonial

Your Friend, Clifton
The hospitality your ranch and ranch hands shown me and my dad was best of the best. The facilities are amazing, the food was great. …

I've been to a few other ranches and they don't show the friendliness that you and your people show.

The animals are top notch, I've never seen so many types of exotics and just the size of them are awesome. I just sit there in awe when I see a wild animal 10 feet from me. It makes me speechless. And when I see the animal that I'm after I'm like a little kid in a candy shop.

Again, your guides that you have are nice and they help me with whatever I need in the blind, as far as maneuverability and getting the right shot on the animal.

I just want to thank you and your staff for a nice weekend and I will definitely be back.

Thanks, Justin Allison & Rod Allison
Had to take a minute to thank Troy, Lori and Bobby for the tremendous hunting experience this past weekend. Being from the…

Northeast, I'd heard about the hog hunting that's going on in Texas and so while I was out on business, I decided to try it out.

Having some tactical background, I was comfortable with my weapon but had never hunted before this trip. I have to say that from the minute I arrived at the Boulder T Ranch, I was made to feel right at home. Bobby got my gear stowed and gave me a tour of the ranch soon after I arrived at the front gate.

I was here to hunt hogs but was immediately amazed at the other animals we saw during our tour. I felt like I was watching the Outdoor Channel as each animal was more impressive than the last. Many of which I'd never seen except on TV (which doesn't do them justice by the way).

Anyway, the hunts were great, saw plenty of game and ended up getting my first hog within the first hour on the first morning. After that, Troy set me up a few more times during the weekend and I passed on a few shots as I was enjoying watching the other game in the area and didn't want to spoil it.

Can't wait to go back and plan on bringing my kids with me as they will enjoy the place as much as I did, I am sure.

Thanks again to everyone at Boulder T Ranch as I could not have enjoyed the weekend any more.

The Hunt Wicked Close team came to film Boulder T Ranch for their TV show on the Pursuit Channel.

We had two great shows with the HWC team. We enjoyed music with No Justice lead singer Steve Rice and the winner of the HWC Facebook contest Robert Lapp. Both of these guys took very nice trophies. As HWC often says, hunt safe, hunt often and always Hunt Wicked Close.

This past November, Hunt Wicked Close had the chance to hunt the Boulder T Ranch in Young County just outside of a small town called Loving, Texas. We were not disappointed.

Troy and Lori, the owners of Boulder T Ranch (formerly called Boulder T Exotics), have ensured that their ranch contains trophy quality animals for their hunters.

The ranch is well managed and the hospitality is first class. Troy, Lori, Bobby and Lia Reaves, along with Ranch Manager CD and his brother Gary, another ranch guide, work hard to give you the best opportunity for a successful hunt.

I was successful harvesting my first Fallow and Wayne, another host of the show, was also successful harvesting his first Aoudad. We were both able to harvest trophy animals with our bows. This ranch has become a Hunt Wicked Close favorite and we highly recommend the Boulder T Ranch if you are looking for trophy exotics and whitetails. Give Troy or Lori a call and book that hunt!Hunting Ranch Testimonial 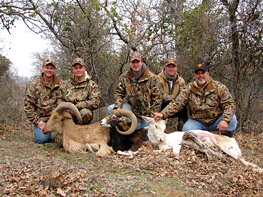 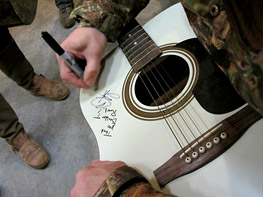 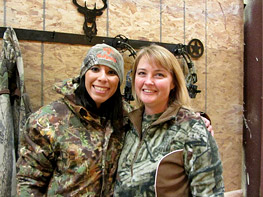 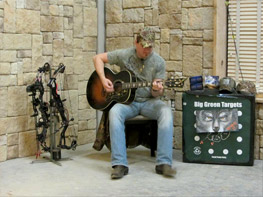